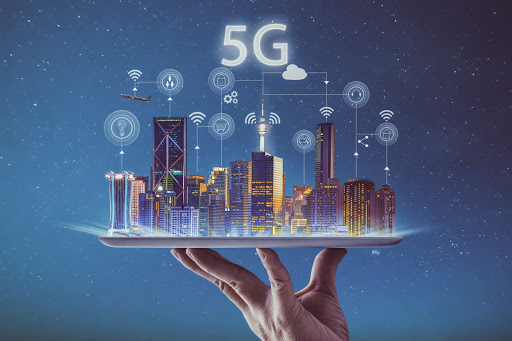 Telecom service operators and chip manufacturers can benefit from the new revenue streams evolving from the digitalization of industries using 5G technology. This transformation is led by the biggest 5G companies. 5G will cause enormous improvements in speed, responsiveness, and scale to support all types of applications and technologies that require huge bandwidth. In addition to impressive 5G mobile download speeds, its capacity to accommodate the innumerable connected devices, smart objects, and embedded sensors will be the most transformative element of 5G technology.

It is predicted that from 2021 to 2027, the global 5G services market is going to grow at a compound annual growth rate of 43.9% to reach USD 414.5 billion by 2027. 5G wireless mobile services will allow an entirely mobile and connected environment by offering a broad range of use cases and business models to customers. Many companies are robustly involved in evolving and testing 5G equipment to be a part of the subsequent growth of 5G networks throughout the world.

Below are the biggest 5G companies to invest in 5G networks by or before 2021 depending on the best market performance, future potential for development, and chances to outshine with this new technology likely to launch worldwide soon.

Ericsson tops the list of the top 5G companies to invest in by or before 2021. Headquartered in Stockholm, Ericsson is a Swedish multinational networking and telecommunications company that operates in about 180 countries. Its annual revenues make it one of the biggest telecommunications companies. Having 27% market share in the 2G/3G/4G mobile network infrastructure market as of 2020, Ericsson is leading field trials and research programs with mobile operators, including Verizon, AT&T (T), China Mobile (CHL), and South Korea’s SK Telecom Company Ltd. (SKM), and many more, worldwide.

Ericsson’s network division is considered a driver in the evolution of 2G, 3G, 4G/LTE, and 5G technology, to grow towards all-IP and improve LTE systems. The company holds more than 49,000 granted patents, among whom many are in wireless communications. More than 27 5G countries benefit from 54 Live 5G networks of Ericsson currently. AT&T, China Mobile, GCI, and Rogers are some of the most prominent content providers that use Ericsson 5G technology. These services offer 5G technology to leading nations including the USA, Canada, and China.

Verizon proposed to grow its quantity of 5G cell sites by 500% this year and arrange its 5G network in 30 new cities by the end of the year. It is an American multinational telecommunications corporation and a corporate part of the Dow Jones Industrial Average. Majestic foresight and predictable expansion of its 5G services have made Verizon 2nd among the top 5G companies to invest in by or before 2021.

Verizon launched its 5G mobile network in April 2019 and was active in 30 cities by year’s end. Because of its stable balance sheet and exceptionally huge subscriber base, Verizon is one of the best 5g stocks to invest in. Verizon’s flagship 5G service is called Verizon 5G Ultra-Wideband.

Nokia, founded in 1865, ranks 3rd among the biggest 5G companies to invest in by or before 2021. It is a Finnish multinational telecommunications, information technology, and consumer electronics company, that adopted 5G technology early on. Nokia is a 5G network supplier and presently, it’s the only network supplier whose 5G technology has been contracted by all four national operators in the US, all three operators in South Korea, and all three national operators in Japan. At present, Nokia has 18 live networks and more than 152 5G agreements. 79 of Nokia’s signed agreements omit other kinds of 5G agreements, including paid network trials, pilots, or demonstrations. Nokia focuses on launching 5G technology worldwide, which makes it one of the top 5G stocks to invest in by or before 2021.

Nokia is a supplier network for numerous notable service providers such as AT&T, Sprint, T-Mobile US and Verizon in the US; Korea Telecom, LG Uplus, and SK Telecom in South Korea; NTT DOCOMO, KDDI, and SoftBank in Japan; Vodafone in Italy; O2 in the UK, Optus and Vodafone Hutchison in Australia; Elisa and Telia in Finland and du in the UAE and STC and Zain in Saudi Arabia. Right now, Nokia has more than 29 live 5G networks.

T-Mobile US (TMUS) is an American wireless network operator. German telecommunications company Deutsche Telekom (DT) is its largest shareholder and a Japanese conglomerate holding company SoftBank Group partly owns the company. Experts argue that, after its Sprint buyout, T-Mobile was among the first service provers to launch a “real 5G nationwide network.” The new T-Mobile network will have almost twice the total size and triple the total 5G capacity of T-Mobile and Sprint combined by 2024. T-Mobile remains one of the leading 5G companies to invest in having a market of USD 129.98 billion and a constant yearly income surpassing USD 44.99 billion.

Qualcomm is an American public multinational corporation based in San Diego, California. It creates and commercializes wireless communication technologies, such as the 3G CDMA standard and the 4G LTE standard. Qualcomm is a leading 5G chip maker. It develops and produces a software and integrated circuits (chipsets) used in wireless network apparatus and mobile devices and also licenses intellectual property linked with these technologies.